CMPD: 19-Year-Old Charged After Fleeing From Police In Stolen Vehicle With Stolen Rifle 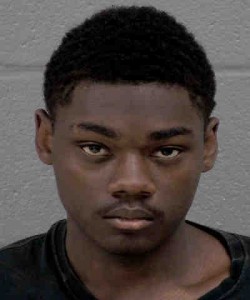 CHARLOTTE, N.C. — A 19-year-old has been arrested after he allegedly terrorized the community with a stolen firearm, fled from officers in a stolen vehicle and barricaded himself in a shed Wednesday night, according to the Charlotte-Mecklenburg Police Department.

According to a news release, around 9:40 p.m. at a Shell gas station, on Brookshire Boulevard, in west Charlotte an off-duty officer spotted a man wearing a bullet proof vest whose actions with a firearm troubled onlookers and raised a concern for public safety. Soon after, the suspect left the gas station in a vehicle, and the officer notified on-duty units in the area of the incident.

Nearby officers soon after attempted to conduct a traffic stop on the vehicle, but the driver fled and ultimately crashed the vehicle near the intersection of Glenwood Drive and South Hoskins Road. All four occupants inside the vehicle fled on foot, and officers were able to quickly apprehend three of them.

Additional officers joined the efforts to apprehend the fourth occupant, the driver, who fled from the vehicle armed with a rifle. While the driver was fleeing on foot, he reportedly pointed the rifle at a nearby community member, and then ran into a shed on Tillman Road, according to police.

Officers began setting up a perimeter to contain the suspect and protect those in the area. CMPD worked alongside SWAT officers to de-escalate the armed encounter into the peaceful surrender of the suspect, identified as Jaquavian Caldwell.

As the investigation continued, it was discovered that both the vehicle Caldwell was driving and the rifle he was carrying were stolen, police said.

Anyone with information about this incident is asked to call 911 or leave the information anonymously by contacting Crime Stoppers at 704-334-1600 or http://charlottecrimestoppers.com/. Jaquavian Byrd Caldwell, CHARLOTTE, N.C. —  The Facebook ads and YouTube videos are everywhere, claiming another stimulus check is on the way soon…. especially for seniors and homeowners.  Really? Or is this just RALEIGH, N.C. — The North Carolina Department of Transportation says it has set an annual record for the amount of trash collected along state roads and highways — and the