HICKORY, N.C. — Hickory Police have charged a 22-year-old Gastonia woman with murder after finding man dead inside his home on Saturday.

On December 4th, officers responded to the home on Startown Road in Hickory and located homicide victim 72-year-old Robert Godfrey inside.

During the initial investigation, police discovered Godfrey’s vehicle was missing and reported it as stolen.

On December 7th, the stolen vehicle was recovered by Charlotte-Mecklenburg Police in the possession of Abraham Adon Jr, 28, of Fort Mill, S.C., according to a news release.

Officers say they attempted to stop Adon who fled into South Carolina, and he is now currently being held in South Carolina awaiting extradition for the charges of Possession of a Stolen Motor Vehicle and Flee/Elude Arrest with a Motor Vehicle.

On December 8th, Hickory Police arrested Bryana Martines, 22, for the murder of Godfrey.

Detectives say Martines is charged with 1st Degree Murder and Possession of a Stolen Motor Vehicle in this case.

She is currently being held at the Catawba County Detention Center under no bond, according to a news release. 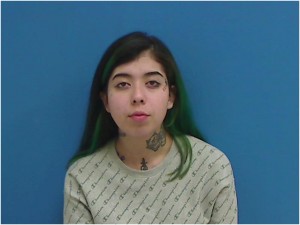 The investigation into this homicide is active and ongoing.

Police ask anyone with more information to call the Hickory Police Department at 828-328-5551 or to call Investigator D. Hudson directly at 828-261-2620 or shudson@hickorync.gov. CHARLOTTE — A Charlotte family is desperately searching for their missing daughter.  14-year-old Savannah Smith walked away from her bus stop Monday morning and disappeared. Her family believes an unknown